59 killed in violent incidents in 24 hours in Afghanistan: monitor group 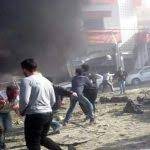 At least 59 people were killed in insurgent activities and clashes in Afghanistan in the past 24 hours, according to a local independent war monitoring group early Wednesday.

“Within the past 24 hours, our team has documented 59 deaths, including eight civilians, nine Afghan National Defense and Security Forces (ANDSF) members, and 42 Taliban militants,” Reduction in Violence (RiV) said on the social media platform twitter.

The group said that there were also 30 civilians, 38 Taliban militants, and seven security forces members wounded in the cited period.

The casualties were observed in 15 violent incidents that took place in seven of the Asian country’s 34 provinces, according to the RiV figures.