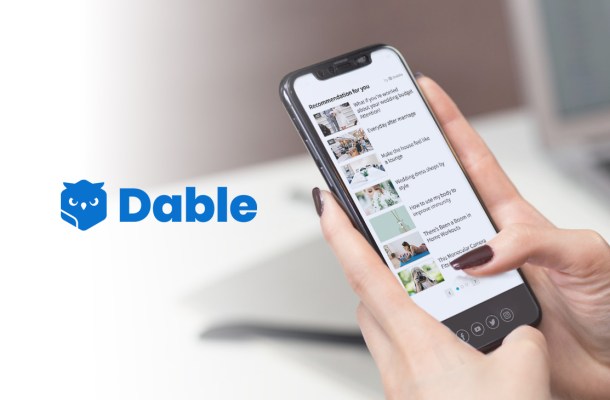 Launched in South Korea five years ago, content discovery platform Dable now serves a total of six markets in Asia. Now it plans to speed up the pace of its expansion, with six new markets in the region planned for this year, before entering European countries and the United States. Dable announced today that it has raised a $12 million Series C at a valuation of $90 million, led by South Korean venture capital firm SV Investment. Other participants included KB Investment and K2 Investment, as well as returning investor Kakao Ventures, a subsidiary of Kakao Corporation, one of South Korea’s largest internet firms.

Dable (the name is a combination of “data” and “able”) currently serves more than 2,500 media outlets in South Korea, Japan, Taiwan, Indonesia, Vietnam and Malaysia. It has subsidiaries in Taiwan, which accounts for 70% of its overseas sales, and Indonesia.

The Series C brings Dable’s total funding so far to $20.5 million. So far, the company has taken a gradual approach to international expansion, co-founder and chief executive officer Chaehyun Lee told TechCrunch, first entering one or two markets and then waiting for business there to stabilize. In 2021, however, it plans to use its Series C to speed up the pace of its expansion, launching in Hong Kong, Singapore, Thailand, mainland China, Australia and Turkey before entering markets in Europe and the United States, too.

The company’s goal is to become the “most utilized personalized recommendation platform in at last 30 countries by 2024.” Lee said it also has plans to transform into a media tech company by launching a content management system (CMS) next year.

Dable’s main rivals include Taboola and Outbrain, both of which are headquartered in New York (and recently called off a merger), but also do business in Asian markets, and Tokyo-based Popin, which also serves clients in Japan and Taiwan.

Dable also provides algorithms that allow clients more flexibility in what kind of personalized content they display, which is a selling point as media companies try to recover from the massive drop in ad spending precipitated by the COVID-19 pandemic. For example, Dable’s Related Articles algorithm is based on content that visitors have already viewed, while its Perused Article algorithm gauges how interested visitors are in certain articles based on metrics like how much time they spent reading them. It also has another algorithm that displays the most viewed articles based on gender and age groups.

Brendan Fraser Takes the Lead in Darren Aronofksy’s The Whale

Fans React to Nicole Kidman Casting in I Love Lucy Biopic, They Want Debra Messing Instead