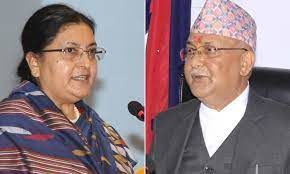 KATHMANDU: President Bidya Devi Bhandari has congratulated Nguyen Xuan Phuc on his appointment as the President of the Socialist Republic of Vietnam.

In a congratulatory message Thursday, President Bhandari said that his appointment to the post of President was a testimony of people’s trust and confidence on him. It is also a recognition of his able leadership and contribution to Vietnam’s development and prosperity, the President said in the message.

Recalling his 2019 visit to Vietnam, Prime Minister Oli has expressed the confidence that the culturally close and friendly relations between the two countries would further consolidate during Prime Minister Chinh’s term of office.