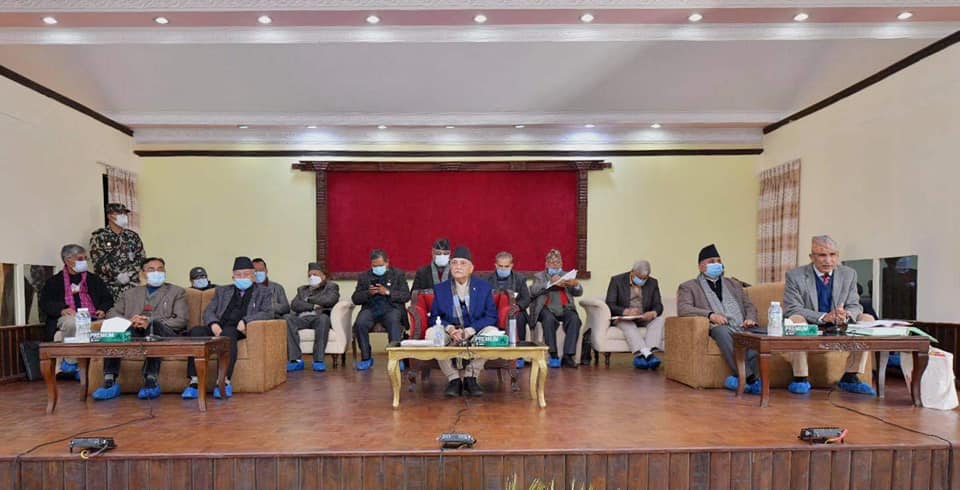 KATHMANDU, April 23:  A meeting of the ruling CPN-UML’s Tenth General Convention Organizing Committee is scheduled to be held at Baluwatar on Friday at 11 AM.

The meeting is taking place at a time when the party is at the verge of vertical split following the two rounds of unsuccessful one-on-one between the party Chairman and Prime Minister KP Sharma Oli  and senior leader Madhav Kumar Nepal earlier on Wednesday and Thursday. Chairman Oli’s meeting with Bamdev Gautam on Thursday evening did not produce any fruitful result either.

The leaders close to leader Nepal and Jhalanath Khanal, however, are said to skip today’s meeting. Today’s meeting will be a continuation of the April 19 meeting which had decided to seek clarification from 27 lawmakers of the House of Representatives (HoR) and five of the Karnali Province Assembly, who are close to the Nepal-Khanal faction.

Some of the lawmakers have already furnished their clarifications, which will be studied and analyzed in today’s meeting in order to take necessary actions, according to Bishal Bhattarai, party’s chief whief at the HoR. Another leader Karna Thapa also confirmed that leaders close to the rival faction will be taken disciplinary action. “We are making necessary preparations for this,” he added.